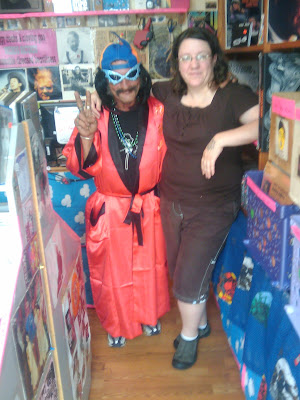 Angela sometimes hosts stuff. For example, you can find out more about the show that happens in her house, Shaves, right on this site. Also, there’s a weekly show on Wednesdays with Roslindale Comedy.

Angela is one of the hosts of Laughing Liberally, a monthly showcase of progressive political humor, as well as Storyclub Boston, a monthly storytelling show run by Ken Green.

Every once in a while, Angela has performed in a comedy festival, like the Women In Comedy Festival, Thunderfest, or the Boston Comedy Arts Festival. She’s also a former comic-in-residence at the world famous Comedy Studio.

In the past, there’ve been showcases called the Riot Shuffle Slot, Midway Presents, the Wreck Room, a production group called the Union Square Round Table, a sci-fi erotica showcase called Storytime At The Ape’s Nest, and a benefit organization called Laugh While You Can. More previous shows and projects can be found on this site under Old Stuff.

Really proud of this drawing of me by the fantastic Katie Baker.

Christine took a pic where I look quite happy to be alive.